Five things I learned about sauna culture in Finland 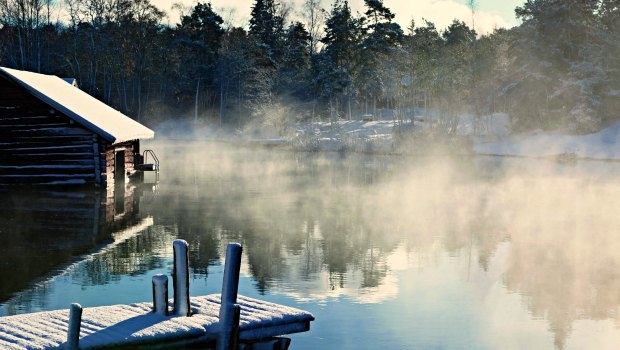 ONE: Sauna is the only Finnish word to make it into everyday English so let’s do it justice and pronounce it right.

TWO: Finland is a nation of 5.5 million people and more than 2 million saunas.

– it’s part of the Finnish DNA – the Finn’s say that “a house without a sauna is not a home”. You’ll find them in homes, apartment blocks (where everyone gets their weekly sauna slot), offices, factories, restaurants (famously there is a Burger King with a sauna) but some of the best are those found in people’s private summer houses outside of the major cities.

THREE: It’s a deeply cherished ritual than runs right to the heart of what it means to be Finnish.

– it’s said in Finland that“in the sauna one must conduct himself as one would in church”, which gives you an idea of how revered this ritual is. Having a sauna goes beyond simply sweating out impurities in the heat. It’s a treasured activity with friends and family and offers a space and time to reflect, relax and socialise.

The sauna experience is not rushed and passes with a wonderful counterpoint between hot and cold as you move between the intense löyly (the steam, heat, humidity and temperature created by throwing water on hot stones) and the outside – ranging from relaxing with a beer outside to cool down or jumping into lakes or pools (whether it’s a Summer’s day or when the water is frozen in Winter).

FOUR: Being naked with strangers really isn’t as weird as it sounds.

– like any Brit I had my reservations and lots of questions but there really is nothing sexual about the Finnish sauna environment. Mixed public saunas are becoming more common (where bathing suits are worn) but traditionally men and women sauna separately. Being naked is in part being able to feel completely clean but more than that it’s about baring all and having nothing to hide. It’s actually an incredibly liberating experience that also provides a positive reality check in a world of polished Instagram posts.

FIVE: The sauna is a place of resolution.

– Finn’s say that “all men are created equal; but nowhere more so than in a sauna”. As you leave your clothes and any preconceptions outside, the sauna becomes a place to connect and find common ground – where talk of jobs, titles or religion are off limits. The Finnish parliament has its own sauna chamber as do all the Finnish embassies around the world. Former president and Nobel peace prize laureate Martti Ahtisaari used sauna diplomacy – diplomatic meetings in the sauna – to move forward negotiations.

Former Finnish Secretary of State Pertti Torstila once put it that “Decisions and negotiations take less time in the high heat. Sauna cools down overexcitement and melts away political differences.” Perhaps we need a little bit of sauna diplomacy in Westminster?